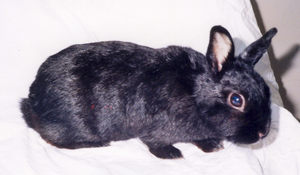 Little Chloe, Princess Chloe as she was called, was adopted by us from Blue Bunnies (a rabbit rescue organization) in February 2003. We made a promise to give her a Forever Home and that is what she had with us.

She had had a very rough life before they rescued her and was very untrusting at first.

We had a problem with her teeth shortly after we got her and had to hand feed her for a number of weeks, this lead to her starting to trust us.

At first, when we would put her in her playpen she might let us pet her head once and then she was off and running. As time when on she would let us pet her more and more and even liked to be kissed on the head.

Early last year (2006) she got head tilt which responded to treatment and was handled but she developed a respiratory infection which would just hang on and on. It would get better and then flare up again.

This infection eventually moved into her nervous system and affected her back legs. She had less and less use of them and for the last 6 months had just dragged them around.

In spite of this, she was a very happy bunny and had become the most affectionate little creature that God has created. She would take every opportunity to give kisses and loved to be cuddled and petted. She would even lay on her back in my arms and let me rub her tummy
to help relieve her stomach upset.

We could not have had a better bunny if
we had custom ordered her.

With All Our Love,