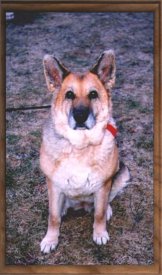 Ginny was a special girl.

her….how could anyone let go of such a sweet senior dog.

No one ever came! How could anyone be so cruel to abandon her?

in the hopes of rehoming her.

Cosmo and Mr. Mugsy as a permanent addition.

Ginny loved to walk and play with a tennis ball.

She assumed the role of grand dame in our house. The boys respected her.

She was tough surviving three surgeries in her 2 1/2 yrs with us.

it difficult for her to stand and walk.

She kept her dignity ’til the end.

We stayed with her while the vet sent her off to the rainbow bridge.

I kissed her and told her to look for Mr. Mugsy who left us in February.

Run to him…he’ll be there to meet you.

I asked her to wait with him until we could all be together again.

The pain of losing her is unbearable.

She was our girl and will be missed for ever more.