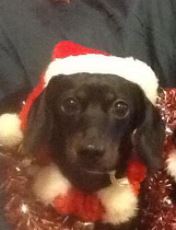 We picked up Jasmine and her sister Daisy in April 2012 in Ohio and took them home to Pennsylvania.  I had always wanted a mostly black Dachshund and Jasmine fit the bill perfectly but I got the puppies for my daughter and she had originally picked the mostly black one.  I was still ok with that because I truly love the dachshund breed.  But on the drive home my daughter changed her mind and wanted the sister… naming her Daisy Mae and wanted me to name her sister.  I named her after her mother, Jasmine.

Jasmine was full of spirit and had that puppy energy that all little ones possessed.  She would always try to get her sister to play with her but she just wasn’t the playing type.  Jasmine would run circles around Daisy while playing in the yard.  Both puppies were a joy to have but Jasmine selected me.  She would follow me everywhere in the house – upstairs, downstairs, bedroom, dining room, and even bathroom!  Always just a step behind me.  In the evening she would cuddle with me on the recliner.  She gave me all her love unconditionally.

As she aged she still followed me everywhere I went in the house or outside.  We began to notice that she didn’t have the energy she once had and when I went upstairs or downstairs she would wait until I returned.  Something was wrong with her.  We assumed it was her back as she did have trouble before with it.  I began carrying her up the stairs and down the stairs but it was getting worse and she began to lose weight quickly.  This was all happening while my wife and I were in the process of moving to another town.  Finally when we got somewhat settled we took her to the vet.  The vet told us that we had one sick little dog and that she had three disks gone in her back and that she had several other serious problems that wouldn’t be able to be fixed… it was only a matter of time.

We took Jasmine home and gave her the medicine the vet had given us to make her comfortable.  It worked for a while but she continued to lose weight and her hair began to fall out at an incredible rate.  I hoped and prayed for a miracle but one never came… Jasmine still followed me but not as much as she once did.  Then she began to just come in to the living room and sit and stare at me – never moving just staring.  We took her back to the vet, knowing that she was trying to tell us that her time had come.  It wasn’t easy that day.  We both said our tearful goodbyes that day.

It’s hard to lose a part of your family and this is the second one little dachshund that chose me that I had to say goodbye to.  I’m not sure I want to go through that again but God never promised that I would have either of them forever – he just loaned them to me to watch over.  I will never forget either their unconditional love.

Jasmine – I hope and pray that the Rainbow Bridge is real and you are waiting there for me.

I will always remember all the loving dogs I had...