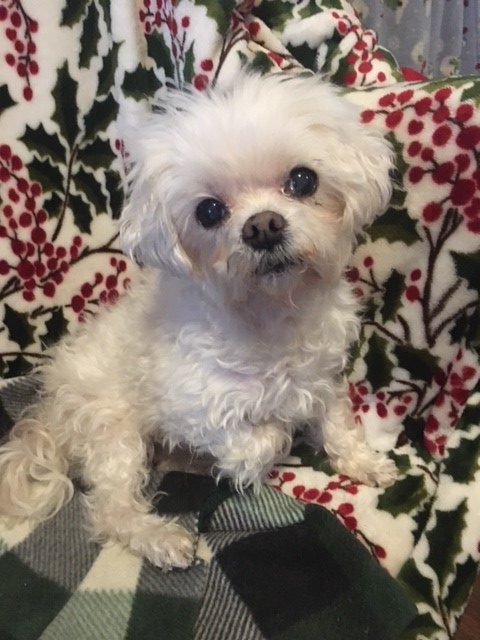 Priscilla and her “sister” Precious came to us in November 2017 when their Mom died. They were in Indiana and a friend of ours went to pick them up and met John and our brother in law in Virginia. They were nervous at first and stuck together most of the time. Priscilla developed a special connection to John. We always thought since he picked her up and they stopped and had a hamburger on the way home might be what let her know that he was going to help her and take care of her. About a year later Priscilla was diagnosed with a heart murmur. We took her to cardiology and started medications which really helped her a lot. In November 2019 we lost Precious suddenly to what most likely was a blood clot in her lung. Priscilla did fine as her new best friend was her dad, John. Priscilla found it her job to be with him all the time. She had a bed under his roll top desk and when he was doing work on the computer you would find Priscilla there. As soon as his feet moved and she knew he was finished on the computer she was out from under the desk and waiting to follow him wherever he went in the house. If he went upstairs without her she would sit at the gate and howl and he would come and get her. When he went out, she sat by the door and would howl and then sit in her chair in the kitchen where she could see out the door and wait for him. She was very devoted to him and she was the cutest little girl. She could be sassy with the other dogs sometimes but never mean with them. She and another of our Maltese Fannie would sit with John on the recliner and go upstairs with him when he was doing paperwork. They would either sit on the bed or sit on the second and third steps from the top so they could see him and still be sure nothing was going on downstairs. He called them the Velcro girls since it was like they were stuck to him! She slept in bed with us at the top of the bed on her own little blanket. Priscilla was very happy here! She liked riding in the car and did not mind getting groomed and even her echocardiograms at the cardiologist did not bother her as John was allowed to be in with her and rub her head. She was very calm. We had a nice Christmas holiday and then our dogs had health problems. Cookie the Shih Tzu died on December 29, 2021, Fannie died on January 16, 2022 and Molly Mop our other Shih Tzu died on January 19, 2022. Being in total shock we could see that Priscilla did not feel as well as she had. We weren’t sure if she was missing Fannie or not. A few days after we noticed this we took her to the vet and her heart murmur had progressed to a #5. Within days we could see a decline. On February 9 early in the morning her breathing became labored and we took her to the vet. She said she was in congestive heart failure and we were pretty much out of options. She had over 4 1/2 years of feeling good with her meds and we knew that we could not let her stress with labored breathing and treatment would not have made her better just prolonged her life. We knew that we needed to let Priscilla go gently and with dignity. John held Priscilla and I rubbed her head and she went quickly. We took her home brokenhearted and buried her in the backyard with the others. She will be greatly missed and her little spot under the desk will always be a memory and her bed will stay there. In memory of our 4 little girls, Cookie, Fannie, Molly Mop and Priscilla I would like to share a poem that helped me with these difficult decisions.
The Last Battle
If it should be that I grow frail and weak
And pain should keep me from my sleep.
Then will you do what must be done,
For this—the last battle–can’t be won.
You will be sad I understand
But don’t let grief then stay your hand.
For on this day, more than the rest,
Your love and friendship must stand the test.
We have had so many happy years,
What is to come can hold no fears.
You wouldn’t want me to suffer so,
When the time comes, please, let me go.
Take me to where my needs they’ll tend.
Only, stay with me till the end.
And hold me firm and speak to me
Until my eyes no longer see.
I know in time you will agree
It is a kindness you do for me.
Although my tail its last has waved,
From pain and suffering I have been saved.
Don’t grieve that it must be you
Who has to decide this thing to do;
We’ve been so close–we two–these years,
Don’t let your heart hold any tears.
Author unknown

Priscilla your love and devotion will remain in our hearts forever. We will always love you!