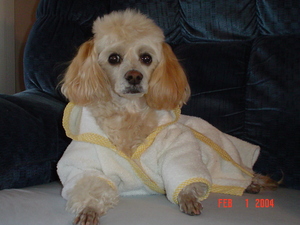 We rescued Toto about 14 years ago – he was a geeky little puppy, insecure but a very happy-go-lucky guy. Over the years, he nursed us through illnesses and griefs, and contributed to our lives in the most meaningfull ways. He grew confidant and regal in his posture and attitude -always well behaved, polite and loving. An immensely good sport and a good soldier.

It was in one short week we quickly lost him -so shocking! Nothing could have prepared us for the pain – the aching – the empty void his departure leaves us with. The only terrible memory we have, is the awful suffering he endured before we put him to rest.

Everyone has the most special, endearing memories of their beloved pets – we all grieve – we all ache – we all mourn. And we all must regale in their glorious ascent to freedom.

The most hurtful experience we are having is the insensitivity of those who cannot grasp the bonds people have with their pets, and sluff off his loss so matter-of-factly.

Toto leaves behind another family member – Chipper. We believe Chipper was aware of Toto’s illness long before anyone else. When we first got him three years ago, Toto had just gone deaf. Chipper, intuitively and voluntarily, became Toto’s “ears” – alerting him whenever there was cause – but still allowing him to be the #1 Dog. He even barked at Toto without making any sounds. His attentiveness and loyalty allowed Toto to rest comfortably, not needing to be nervous of his surroundings while Chipper was standing watch.

We have been using American Sign Language with him for about three years – and smaller Chipper has learned it as well. Whenever he wasn’t interested in what we had to “sign” – Toto turned his back and walked away! ‘Lil stinker!

I am so glad I was able to keep a lock of his georgeous hair, a wonderful paw print and many, many great photos. I shared all of my thoughts and feelings with him – and reassured him he did a great job mentoring Chipper and being the best dog in the world he could possibly be! He will have only great stories to share with his new Angel Pals.

He was euthanized Tuesday November 13, and we just picked up his remains yesterday – the 16th.

Today they were doing the Blessing of the Animals. I took Chipper, and also the little pine box containing Toto’s remains. The Pastor so kindly blessed them for me – it was such a comfort.

We can’t thank our Veterinarian enough – Gary White at Valley Veterinary Clinic in Murrieta, California. He was so loving and gentle and kind with Toto, even after Toto passed, he held him and shared gentle words of comfort with him.

Also, the very nice people at Circle of Life Pet Crematorium in Hemet. I don’t know how they do what they do, and still maintain such a gentle demeanor.

They were both so accomodating.

Seniors faced with losing their beloved pet are distraught and frightened. Unfortunately our “behavior” caused Toto’s critical care to be terminated, and his meds denied at California Veterinary Specialists in Murrieta – we were guilty of the horrible crime of requesting that the Veterinarian “sign” HI to Toto – to reassure and calm him. Unlike the other two facilities – that was a nasty place with nastier people! We were frantic and very disturbed at our pet’s failing health and his prognosis. No – we were not on our best behavior. But to punish our pet by terminating his care
was cruel and heartless.

Having this venue to memorialize Toto is just euphoric! Every story is heartwrenching. Even the single solitary name of an owner with no other words, speaks volumes.

To all of you pet lovers all over the world – we are so blessed to have had their love and companionship for no matter how long. Our hearts glow and are lined with the memories and fondness only our pets could have provided.