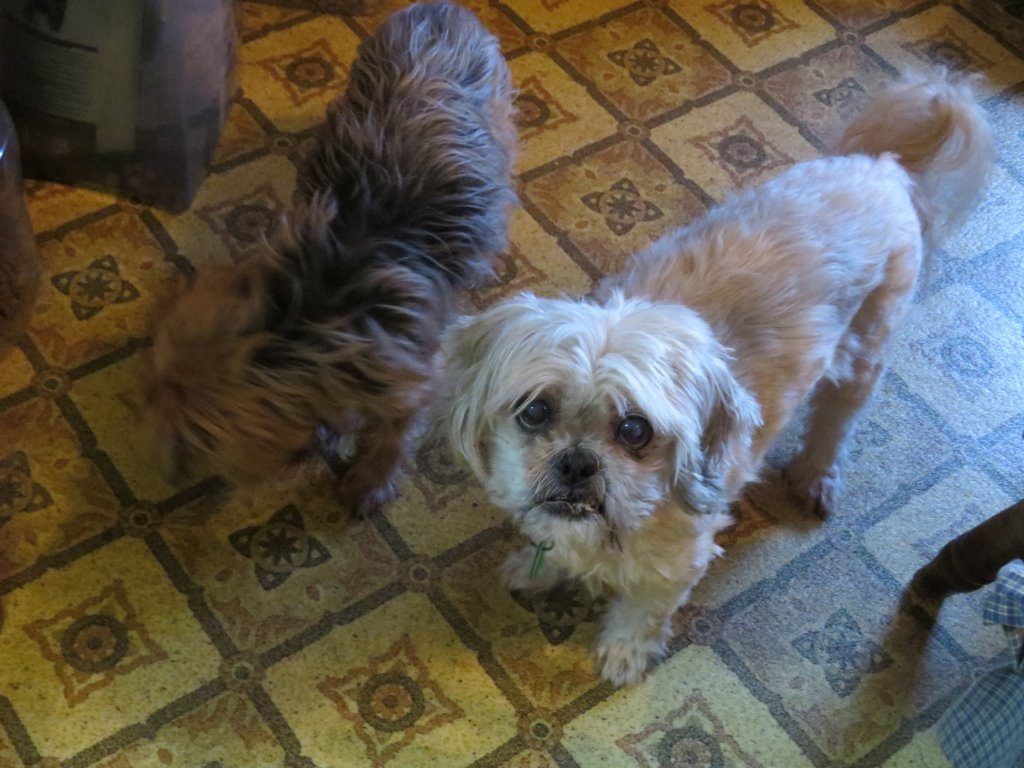 Alma and Addy the Shih Tzu sisters came to us on February 15, 2015. They were 12 years old and their previous Mom had to go to personal care. They were a bonded pair and had been together their whole life. When I saw them listed on Pet Finder my heart went out to them. I know to find a home for a little senior is hard and even harder to find a home for two seniors. So, we decided to apply for them. We were given an approval and the home visit was done. Now we were on our way to their foster Mom’s house to meet them. Liz welcomed us to her home. She told us that Addy was more socialized and Alma was shy and reserved. We went in and I sat down on the sofa and Addy came over. My husband John sat on the floor close to the bed where Alma was resting. He started to pet her. She seemed to love it before long she got closer to him. He ended up with her sitting on his lap and we knew for sure these little girls would fit into our home and all would work out well with them. We put a blanket on the back seat of the car and I rode back there with them. It was about a 25 minute ride and they were very nervous. I kept petting them and telling them this will be fine and you are going to a nice new home with a fenced yard and lots of friends. They seemed to like the other dogs right away.

I had fixed a cubby area in the hallway to our kitchen where they could see all the activity and yet have their own space for a few days. They watched our every move. Within a couple days they were in the house free with the rest of the gang. Everyone was very nice to them and they seemed happy with us. As time passed they were more and more relaxed and to our surprise Alma became very outgoing. She had started to bark and run to the door to greet visitors and was just so happy. She bonded with John that first day and he worked so hard to make her see that this was their forever home and she was safe. She and Addy were together all the time for the first few months and then gradually they started to join in more with the others and even sleep in separate rooms for their naps and at night. They felt their comfort zone.

Alma was very healthy except for a bad ear infection in the fall which took a little while to clear up. She loved to eat and learned to go down the four back steps to the fenced yard. She did not go up the steps but did go down. She would bark and circle to go out and we found her to be very good about letting us know it was time for a potty break. We were thrilled with the Shih Tzu breed and loved these girls very much. On Wednesday April 13, 2016 Alma was fine at noon time and ran to the door barking when we came home from running errands.

About three o’clock she became restless and went to the door. We took her out and she threw up. She got very shaky and seemed weak and painful. I called the vet and took her in right away. X rays and blood work were done. They saw nothing on the x ray but her tummy was sensitive. Her blood work was good except that there were hardly any white cells. She was right away put on fluids and antibiotics and stomach medicine. Two hour later we went back and she was getting worse. They transferred her to an all night clinic with round the clock care as our doctors do not have all night care. As we drove her over she was very quiet and sad. When we got there they checked her and told us they would start IV fluids and meds as our doctor prescribed.

We kissed her good bye and told her we would be back in the morning to get her. I texted at 10:30 and they said she was very weak and restful as they did pain meds. They sent me a picture of her resting. At 1:20 am the phone rang and they said she was getting worse quickly so we were ready to go to see her when the vet came back on the phone and said she was gone. We were in shock and all I could do was cry and cry.

Since we had no idea what was wrong and we have other dogs it was decided an autopsy would be a wise decision. John went to pick her up and take her to our vet for the procedure. They called us and said she had a perforated bowel and a large tumor that did not show on the x ray. It was thought it perforated either when she threw up or just after that. So our little girl was gone and we are still in shock. Her sister Addy is doing okay so far and I can’t imagine how she feels without the sister she had for over 13 years. Being rescue parents many times we have felt these losses before but each one is terrible and no matter how long they are with us it is a great loss of a family member.

I want to think that Alma knew we loved her always and pray she could feel our love as she made her final journey. She is buried in the backyard with our other little ones that have passed before her. I wish that I could make people see how very important it is to rescue dogs in need of homes and never, ever buy from on line or anything that looks like a puppy mill. Too many little ones are destroyed because people keep buying. If they could only see the abuse and neglect of the parents of these little dogs they would be horrified. So if Alma could say something I would know she would say please give a rescue like my sister and I a chance at another home like we got.