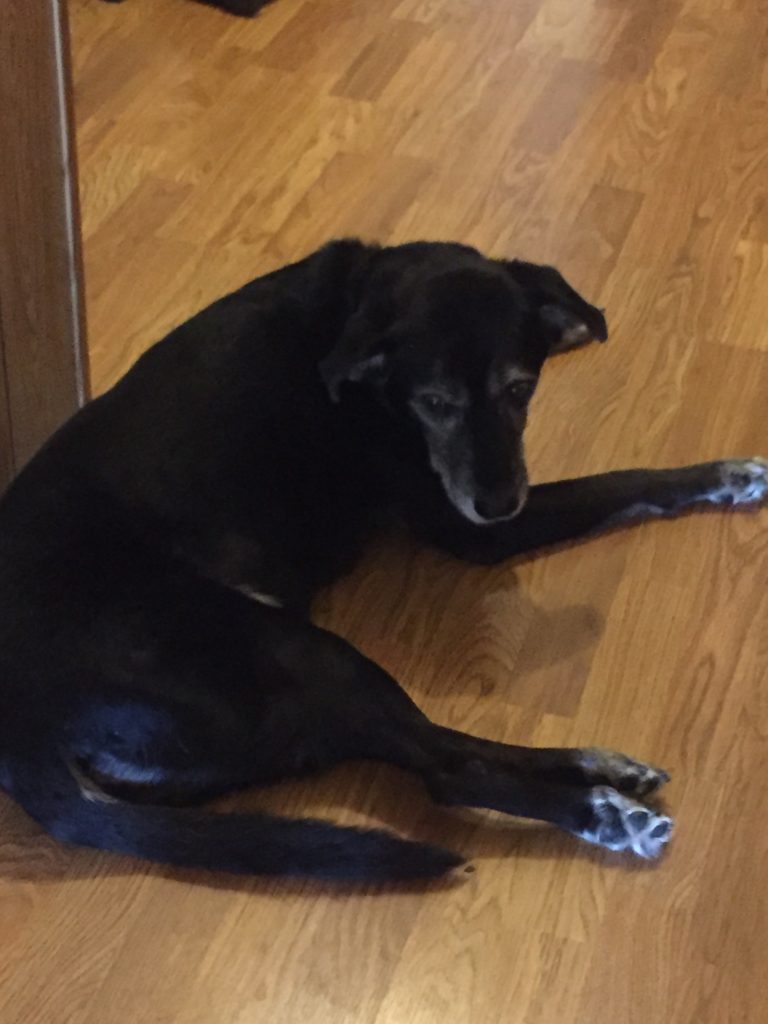 Midnight was a sweetheart. He was so laid back and got along with everyone, two legged or four legged. Midnight belonged to a former co-worker who was relocating to south Florida and unbeknownst to her until it was too late, she could not take him. Midnight went to live with her daughter who was already overwhelmed with other issues. They were talking about taking him to the pound and as he was already 13 years old, I did not think that would end well. I offered to help find a home for him, and after keeping him with us for a couple of days, hubby said “we’ll keep him”.

Midnight loved to follow us throughout the house when we were home, so we dubbed him “Shadow”. He loved to bark at the ducks. He loved to bark at just about anything, but after a few days, he figured out what belonged in the area and what didn’t. His favorite toy was a “banana”. It had a plastic bottle inside of it and he loved the noises it made when he picked it up and threw it around. We took a few trips to the dog park where he was able to make some new friends and get some exercise. For a 13 year old dog, he got around remarkably well.

We never discouraged his company on the couch, but he never got on the bed or the furniture…unless we weren’t home. When we walked through the door he would look up and immediately get on the floor. He got bullied by Sabrina quite a bit, but he had friends in Spock and Gypsy. Needless to say, we had a full house, but we wouldn’t have had it any other way. Midnight was a joy and I stayed in touch with his first mom to keep her updated on his shenanigans.

Midnight starting having some tummy issues and we learned he had pancreatitis. We would seem to get a handle on it, but when we stopped the meds, it seemed to come back. If Midnight did not want to eat, he was not feeling good. After a few rounds of this, we had an ultrasound done and found a spot on his liver. At the time, we did not think it would be an issue, but within a couple of months, a follow up ultrasound showed that spot had grown very large very quickly. Because of his blood work and his increased lethargy and lack of appetite, we suspected he had liver cancer.

Sweet Midnight had ears like velvet, the softest ears of any dog I’ve ever petted. Midnight, I know you were a joy to your first family and I wish we could have had you longer. On December 8th, 2017, I petted his ears, kissed him and told him he was loved very much and he slipped quietly into that good night.