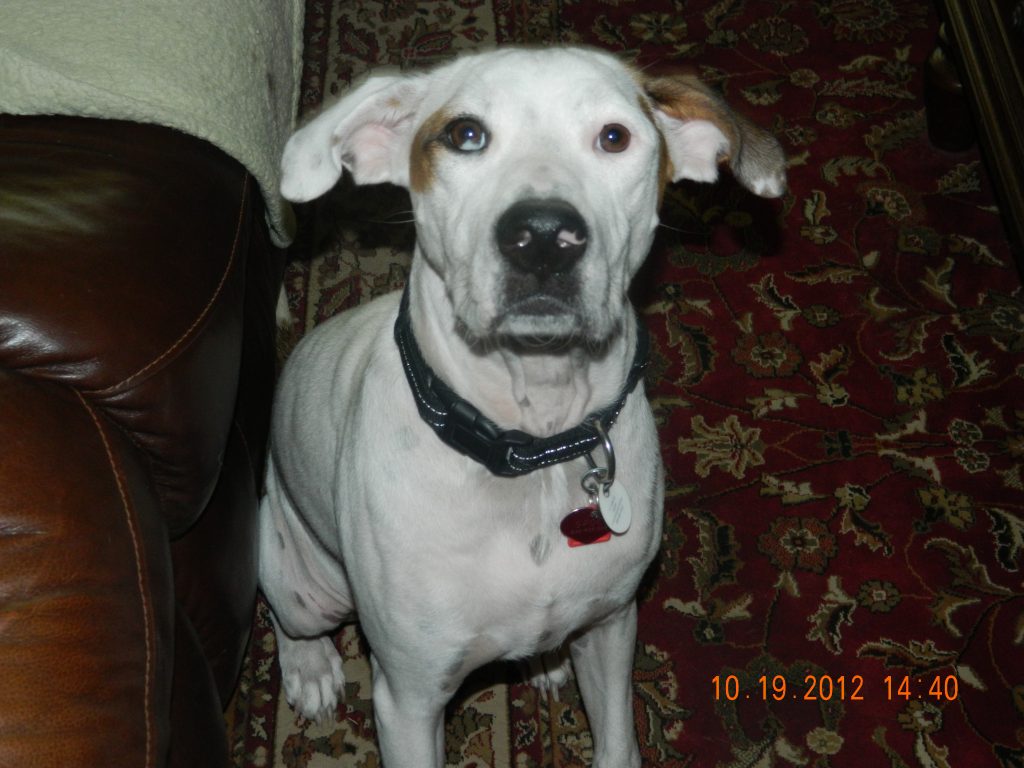 The sweetest boy that ever lived – Spock, my sweetest boy. I remember the day you found me. It was February 10, 2012. We were all living in Texas and I had stopped on the road because I saw another dog running around loose with a chain or leash dragging behind. When I stopped this dog had cantered off to what I hoped was home, and there you were playing with half a dozen other dogs, some bigger and some smaller. I went back to my car and you started following me. I told you to go back home, but the people living in the mobile homes around there hollered that you did not belong there. You were so skinny, but so friendly. I took you home and you spent the night. Thinking that we could not care for four dogs, the next day I took you to a no-kill shelter, but I knew you were sick because your nose was running and you were coughing. You actually spent the night with Daddy in his “man cave” because we did not know if you had something that our other babies could catch. I called that shelter everyday asking if you were ok and finally they said if I wanted you to come back and pick you up. I could not get there fast enough. We could not get you out of our minds. I think you were even skinnier when I picked you up and I don’t think they did a thing to treat you. You weren’t even wearing the collar I had bought for you, but they did provide another. Needless to say, you got another new collar.

I felt so sorry for you. I had never seen a dog your size reverse sneeze so much and you would do it until you coughed and then you coughed until you were sick. I took you to the emergency vet and they did squat. I took you to our regular vet and they suggested putting you down, even though they pegged you at being about a year old. I took you to another vet and she started treating you with steroids. We tried to minimize their use and I was able to get cough syrup for you. You would not take it off the spoon, but when I mixed it in your dog food turning it all a gooey pink, you slurped it all up.

We used to say you thought you were a cat because you jumped up on the kitchen counter. You were agile enough that you did not knock a thing over. Of course, this also got you half of a sugar free apple pie from Cracker Barrel. Things of that nature we kept on the top of the fridge from then on. You could not get that high, thank goodness. But we were astounded by your agility. You looked like you could fly when you ran through the yard.

Chief was not crazy about you the first time he saw you, which happened to be outside and you were on the other side of the fence. All he saw was a strange dog and he went into protective mode. When I brought you home, we put up the doggie crate and had you wait as I brought out your new siblings. Sabrina came first and you hit it off. Gypsy was next and she was so laid back she would have gotten along with anyone. Then I crated you again and had Chief come out. He looked at you in the crate and never growled at you again. I brought you in the house and that was good enough for him. You and Sabrina got to be the absolute best of friends and chased each other all over the place. She would jump up on you and nibble your ears and you would stick your nose under her and flip her. It was such a joy to watch you play.

Not long after you came to us, Daddy was diagnosed with stage four throat cancer. His treatment was grueling and you were there to cuddle with him. You would spoon him in the bed and it was so cute to watch you two sleep together. Luckily, Daddy recovered and is cancer free today. Over the years you had an endearing habit of “spooning” daddy, usually with your tail end facing him. There were some really aromatic nights. You were a good cuddler.

One day I was looking for you in the yard and could not see you. I know how you liked chasing squirrels and whatever was moving in the yard. I found you in the tree! You were not in just a low-lying branch, oh no, you were up at least fifteen feet! Daddy went to get a ladder but when he got back, you had already made it down. We discouraged any tree climbing after that.

About a year after you came to us, our family dwindled. We lost human family and Chief crossed Rainbow Bridge. Gypsy grieved and I think it took her awhile to recover. We grieved over all our losses. Your funny little face giving us kisses helped and you soothed our broken hearts. You were always there for us.

About a year after that, we moved back home to Florida. You adjusted nicely and had no problems with a smaller yard and a smaller house. I introduced you to our long time vet here and you were a hit with him and all his staff. He actually found a regimen that helped with your chronic coughing. It seemed like it never really went away. It was like an asthmatic condition and I could sympathize since I suffer from asthma as well. You didn’t need cough medicine anymore. You always jumped around for your food but you sat like a gentleman until we said “ok” and then you dove in.

Over the next few years, you saw Gypsy cross Rainbow Bridge and we did a couple of rescues for older dogs. Midnight only stayed with us a little over a year, but you were great with him. Hannah was with us just a little over two years and she was a little more standoffish, but you were a gentleman with her as well. Sabrina was getting older and while she still played with you, she could not roughhouse as much. She let you know, and you understood. You always went with the flow.

October 2019 we found out you had a thyroid condition and naturally, we got you what you medication. It seemed in January you started coughing a little more and the reverse sneezing started up again. Neither of these conditions had bothered you for nearly 6 years. We did a little tweaking of medications and you would be fine for a few weeks. But, your body seemed to adapt to whatever changes we made and gradually the symptoms came back. We had no idea what was triggering these spells.

Spock, our sweet, sensitive and gentle loving dog. Three ER visits, several vet visits and a recommendation to see a specialist were all conducted. We only wanted to help you. I pray that you did not feel we were abandoning you at the hospital. You had never spent a night away from us. All indications were that you would undergo tests and come home with us. Even the vet who treated you at the hospital could not give an explanation why everything went so terribly wrong. Please Spock, we did not abandon you. We only wanted to make you well and were doing what we thought best at the time. I’m so sorry we were not there, especially when I think that was when you needed us the most. My heart hurts because I feel we let you down. There is not a day that goes by that I do not shed a tear for you.

To honor you and everything you were, we are looking to adopt another dog that needs a home. I hope your spirit visits to calm her down and let her know we will do our utmost to see she is never in pain or ever gets hurt again.

I cannot describe how much you have meant to us. Everyone loved you. Your untimely passing has left a hole so big in our hearts. I see your sweet face in so many pictures and I try very hard to think of all the fun you had with us through all the good years. You have several other Altizer pups on the bridge to play with, and you can climb all the trees you want. Run, sweet boy. Till we see you again…forever in our hearts.

You were loved so much.