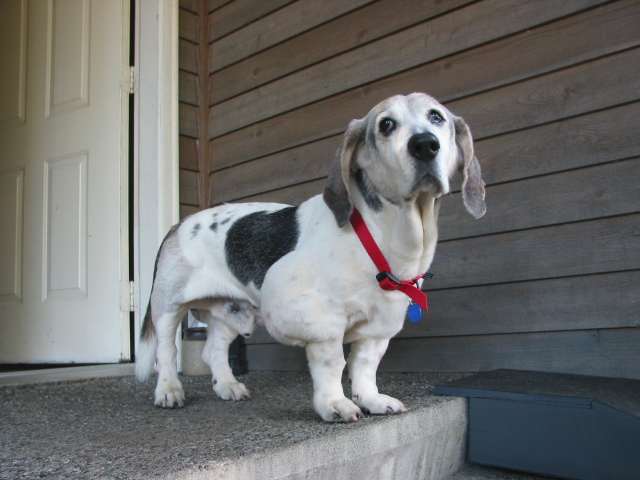 We had gone to the shelter to adopt a miniature dachshund puppy, but immediately realized that the puppy would find a home very soon. So we looked in the kennel next to him and saw an old basset hound with a giant tumor on his front leg. Realizing that no one was going to adopt him and that he would probably be euthanized, we decided to take him home. After taking him to the vet, a biopsy of his tumor showed that it was malignant, and the vet gave him 3-12 months to live. But Otis loved us, and he hung on for almost two years.

He was Mama’s Big Boy to my wife, and she adored this family dog, who she said had an old soul. Otis was the most affectionate of all our dogs, and loved to rub against anyone who would let him. If he could have fit, he would have sat in your lap. There was a special bond between my wife and Otis, and he always wanted to be near her.

The few times we accidentally took our eyes off him outside, we could see how his hound’s nose would have led him to disappear on his previous owner. Although he moved slowly, he would just keep going, following his nose. Fortunately, we always caught up to him. Otis became friends with the other dogs in the house, Annie and Bella, and after Bella died, Buddy. He even got along with Midnight, my wife’s cat of 16 years.

Sadly, his cancer finally caught up with him, as he had been incontinent for several months, lost a lot of weight, lost his ability to use his hind legs, and was in pain. We made the decision to euthanize him, and since we are both opposed to the practice except in cases of irreversible pain and suffering, it was a very difficult decision. Otis was very happy living with us, and was very loving to everyone. He was the epitome of a Good Dog.

Thank you for your gentleness and love